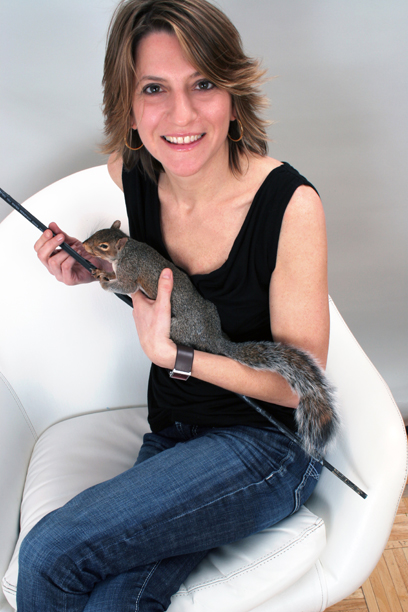 What sparked your interest in taxidermy?

I was on a safari in Africa when I wandered into a hunting camp and saw freshly skinned animal pelts. I was horrified. What’s the point in taking an animal and turning it into a replica of itself? I grew up in New Jersey, a mile from David Schwendeman, the last chief taxidermist for the American Museum of Natural History, and when I came home, I visited the Schwendeman family studio, expecting them to be creepy animal killers like Norman Bates. But instead I felt as if I had fallen into Darwin’s study with all the skeletons and birds, the beauty and the strange tools—

And brain spoons. But the Schwendemans are gentle naturalists and the contradiction pulled me in. David Schwendeman is in his mid-80s and like a boy; his eyes are always wandering, following the birds and the squirrels. He doesn’t even like the term bird watcher because it’s too specific; he’s a pure field naturalist from the Victorian age. That’s something I’m becoming obsessed with, how we’re all Victorians now.

All this nature mania. I just saw Fantastic Mr. Fox and thought that if Wes Anderson had been alive in the 1850s, he’d have been a Victorian taxidermist making little scenes of kittens dressed as brides. It’s the passion of the amateur; Darwin himself was an amateur. We have the Rainforest Café, the Build-A-Bear Workshop—everything is animals. We long for them as they disappear. It’s ironic—the Victorians needed taxidermy to see new animals brought over from South America, and with the rate of wildlife extinction today, we might need taxidermists for the same reason. DNA studies can never show you coat color, for instance, or how an animal behaved in the wild.

Do you think taxidermy is an art form?

I do, but it’s complicated. If you have too much art in taxidermy it’s no longer science. If your anatomy isn’t absolutely perfect, it shows through immediately. Taxidermy combines three aspects that aren’t brought together very often: hunting, art, and science. What I did was find a person to represent each of these three aspects. I went for the most talented people I could find, each of whom is on a quest to understand nature on its own terms. Ken Walker, the guy I write about who is recreating the extinct Irish elk, has no formal training. He’s a hunter and a Roy Orbison impersonator which feels appropriate. Taxidermy is like karaoke. It’s passionate mimicry. The people who love the singer the most get the voice right.